Care Homes in Britain have been left underequipped for dealing with COVID-19, has this highlighted the intrinsically ageist nature that is embedded in our society? 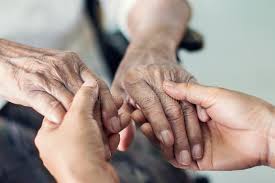 Social care has been dubbed a forgotten front in the battle against COVID-19, the disease caused by the coronavirus, which experts fear has already ripped through Britain’s care homes.

Older people and those with underlying health issues are more at risk of COVID-19 and reports are mounting of thousands of deaths and cases that were missed by official data.

Advocacy groups and care workers fighting the virus up close - often with low pay, training and recognition - are calling for more protective equipment to keep safe.

The government said on Wednesday it would increase testing for the disease in care homes, as pressure to protect vulnerable residents and workers intensifies.

And Care England chief executive Professor Martin Green now warns: “The vast majority of care homes have not had access to testing so the figure will be significantly higher than 9%.

"Every person in a care home is in a high-risk category. They don’t just have one or two health conditions. They have four, five, six, which makes them extremely vulnerable.

“It would help if we had a greater supply of personal protective equipment. Each care home has had a delivery but 300 masks is not enough where there are 60 or 70 people.”

He said some care homes are coping with a third of staff off sick, adding: “It’s a significant minority of care homes with cases at the moment but it will get worse, particularly if we don’t get PPE.

Asked whether he believed the elderly had been “written off” amid the coronavirus crisis, Mr Green said: “We are an entirely ageist society”.

In health and social care, a review found that stereotypes are even more negative, with attitudes focusing on death and physical decline, and ageing seen as a process of increasing ill health.

The media is a key driver of negative attitudes, the study says, representing ageing as a crisis or a societal burden, with the ageing population described using metaphors such as “grey tsunami”, “demographic cliff” and “demographic timebomb”. Often, older people are depicted as “villains” unfairly consuming too many of society’s resources.

Your E-mail has been sent. We will be in contact with you soon.

Please refresh the page and re-submit the form.

SORRY
Your content caused an error and your email has not been sent.
Please remove any unusual characters and try again